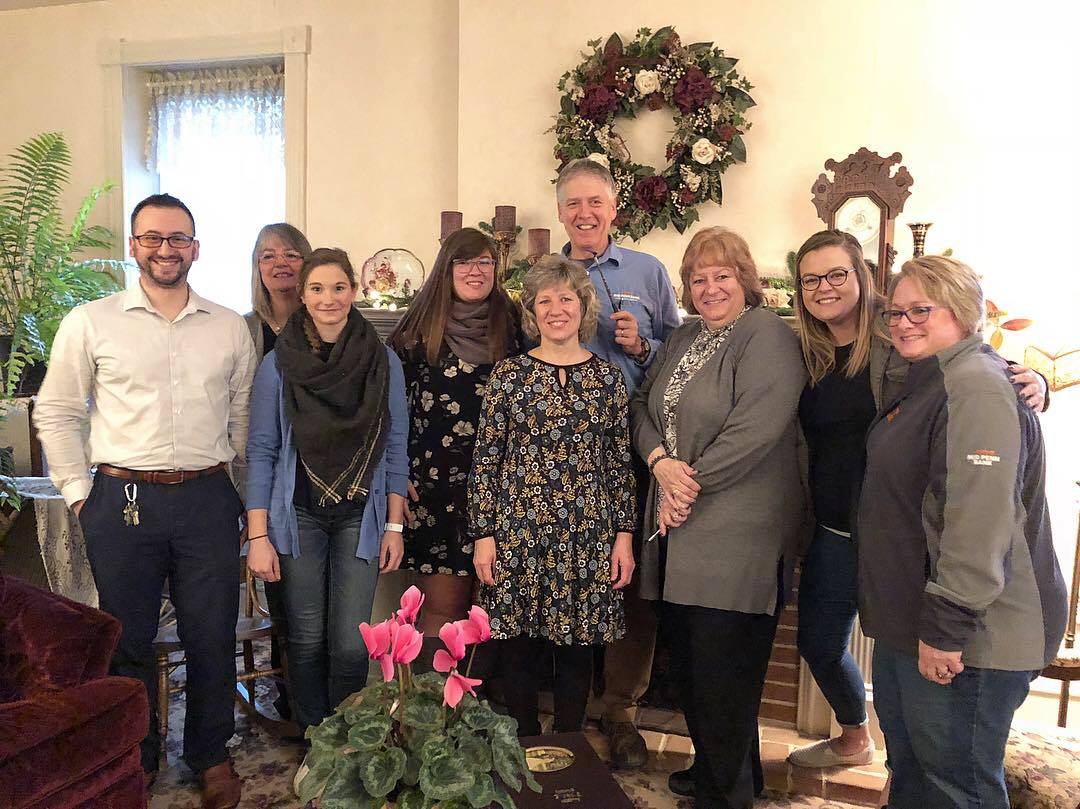 It’s 8 AM on a cold and rainy Monday morning when I find myself checking out a concrete building, five football fields long, that usually houses chickens for Bell & Evans, but is currently empty. Tuesday morning, 72,000 chicks will get delivered and the building I’m in, plus another identical one, will be filled to the brim with chirping baby birds. Bertie, the owner, and Mid Penn Bank’s Senior Agricultural Lender, Stan Michonski, are explaining to me how the business of being a chicken producer works. This is a totally new world for me—farming is not something I’ve done a lot of in my 35 years on this planet. Particularly when you consider that literally all of those years have been lived in downtown or urban settings, and not remotely in an environment like the softly rolling hills of Lancaster County, PA. 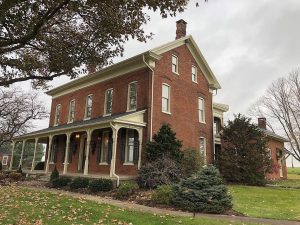 As I’m listening, I’m also taking everything in: the smells of a farm, how clean and organized everything is, the sheer SIZE of the building. When we step outside into the soft drizzle, and I look over the fields to the old, brick farmhouse, it’s windows warmly glowing in the early morning light, I fondly remember how it came to be that my stomach is full of some of the best breakfast food I’ve ever eaten, how I found myself in this massive building with these two eager and smart people and I realize that today has already been so special. But, I’m getting ahead of myself. Let’s backtrack a bit.

It all started with a simple phone call. 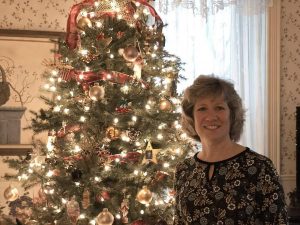 Mid Penn Bank makes a habit of calling our customers on their birthdays. It’s something we do that reinforces our relationship with those who choose to bank with us. Plus, it’s just nice. Who doesn’t love being wished a “Happy Birthday”? A few years ago, Bertie Ziegler got one of those very birthday calls. Carolyn Baird, the Head Teller at our Elizabethtown branch, enthusiastically sang “Happy Birthday” to Bertie. Now, while Carolyn calls customers for their birthdays, she doesn’t sing to just anyone. The staff at E-town had known Bertie for a while; she was a regular customer (and, admittedly, one of their favorites!) and they knew how special Bertie was. What they didn’t know was just how much that *routine* phone call would mean to Bertie. Bertie’s husband Gordie had been experiencing some very serious medical issues, as well as her son’s best friend passing away suddenly. Bertie was having a tough time dealing with everything and when Carolyn happened to call Bertie on her birthday, that cheerful phone call was just the boost that Bertie needed. “The Lord knew I needed that, right at that moment,” Bertie recalled. She shared with her husband how much the phone call had buoyed her and she resolved to do something to thank Carolyn and the Elizabethtown branch staff. And with that, Breakfast at Bertie’s was born! 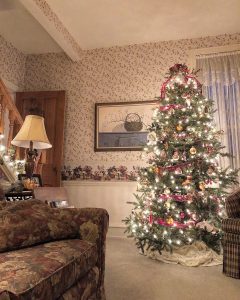 Bertie invited the E-town crew to her home, early one morning before work, and cooked them a three-course breakfast. As an experienced cook and host—Bertie & Gordie’s historic farm house was a bed & breakfast for years until a new state road was put in and the increased traffic detracted significantly from the peace and quiet of the otherwise idyllic location—it was natural for Bertie to cook for someone as a way to show her appreciation. The first breakfast was so fun, the group decided to do it again, and again, and now it’s become something of a tradition!

When people ask me what I do for Mid Penn Bank, I usually say, “I’m the bank’s storyteller!” A major part of my responsibilities means I’m working with the staff throughout our footprint to help tell the stories about our communities: how the bank is supporting the unique needs and efforts of our neighbors and customers in each of the towns we serve. I collate those stories, gather photos and videos of said efforts and share them across various social and digital platforms. The scope of my work means I eventually come across stories like Bertie’s; something so exceptional, it deserves being conveyed in a more meaningful way.

I caught wind of Breakfast at Bertie’s through the proverbial “grapevine” and gave the Elizabethtown branch a ring one day to get the low down on this intriguing tradition. Chris DiStasio, the branch’s Assistant Manager, explained it to me and then said, “Why don’t you join us for the next one?” I was, admittedly, excited about the idea of partaking in what had been described to me as a delicious tradition. But, I was also worried about coming off like an outsider or an interloper; disrupting the normal feel of a group of friends who were all comfortable with each other. However, Chris insisted that Bertie would welcome me. So, I trusted him and a few months later (we had a heck of a time scheduling), I found myself pulling into Bertie Ziegler’s driveway at 6:30 AM on a rainy Monday. 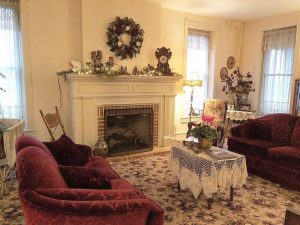 As soon as I set foot in her house, I felt at home. 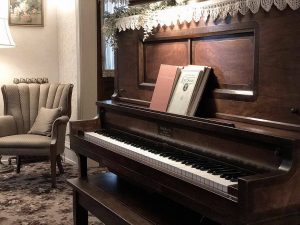 Coming from a large Italian family, where anyone who liked to eat was welcome as part of the clan, it all felt familiar to me: people milling around the kitchen, talking and helping while Bertie bustled about, making the final preparations for our meal. One thing that’s apparent from the instant you enter Bertie’s home is that she has a keen attention to detail. The interior is lovingly decorated in just the sort of way you would expect from a Victorian-era farmhouse: comfortable furniture, pretty floral wallpaper, gorgeous antique pieces, even a player piano! (Bertie later gave us a demo of this instrument, complete with a sing along!) It was so warm and inviting, it left no doubt that anyone who had stayed at Bertie’s in the home’s previous life as a bed and breakfast had felt completely and utterly welcomed there. 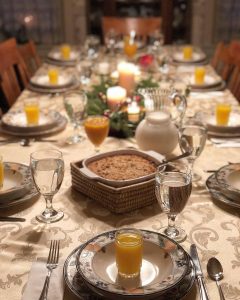 Then, with a call to take our seats, breakfast began! The formal dining room was set for 10: formal place settings with multiple dishes, a beautiful Christmas-y centerpiece and a glass of freshly squeezed orange juice for each guest. Around the table we sat. I was in the company of six members of the Elizabethtown branch staff, Senior Agricultural Lender Stan, another Mid Penn Bank employee that happens to live in the area, and Bertie’s father. Bertie led us in the saying of “grace” and we were off to the races! I had been warned ahead of time to “come hungry—VERY hungry” but I had no inkling of just what I was in for… 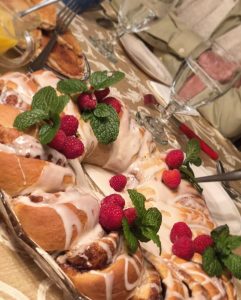 I was previously unfamiliar with what a ham ball was—and was appropriately admonished by the rest of the crew for having family from Lancaster County and not knowing what ham balls were—but let me tell you: they are FANTASTIC. It’s a ground-up mixture, from local meat purveyor Wenger’s, with flavors and texture similar to ham loaf. And they were delicious—caramelized on the outside and sweet and salty on the inside. As a *mostly* vegetarian, I was pleasantly surprised at how much I enjoyed them. I shamelessly finished every last crumb on my plate and just as I thought we were done, Bertie marches into the dining room with the most beautiful pastry I have ever seen. She calls it a “tea ring”; it’s basically a light, fluffy bread dough swirled with cinnamon, rolled into a wreath, baked and topped with a drizzle of glaze. Made entirely from scratch, it is exactly the kind of thing you “make room for” even when you think you’ll burst if you have another bite.

Bertie finally joined us in the dining room and she shared with me the breakfast tradition’s origins, about her family and their relationship with the bank. They’ve been customers for a long time, beginning with a loan that was handled out of our Millersburg branch decades ago. Until 2015, when we opened our Elizabethtown location, Bertie was still mailing all her related banking to Millersburg!

Since that first loan, and especially since the branch opened near their home, the Zieglers have always been welcomed at Mid Penn Bank as not only customers, but friends. Listening to her, it’s clear that Bertie thinks of every person at the table that morning as part of her extended family; they matter to her. And I got the distinct impression that that’s how Bertie feels about most people. She is warm, inviting and undeniably kind. I was practically a perfect stranger to her and yet I felt instantly at home because of her inherent hospitality. The conversation waned and, as you do when you’re being hosted to such a delicious meal, we all helped clear the table. 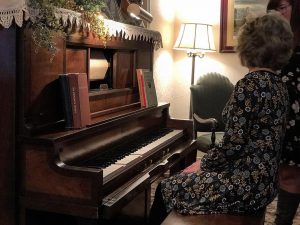 The group migrated naturally to the living room and Bertie treated us to a demonstration of the player piano—a beautiful specimen, still in good working order. Afterwards, I took a group photo and one by one the crowd dwindled; their stomachs pleasantly stuffed, headed off to open the branch. A different fate awaited Stan and I—we were scheduled to spend the day visiting several of his Agricultural lending customers, but that’s a story for another day—and we were the last two there. That’s how I found myself where this story began; in a 500-yard-long building learning about chicken production.

I said earlier I see myself as the bank’s storyteller. I get to dig up and explore the nuggets like Bertie’s story and share them with others. What makes this story so special is that it represents a unique aspect of community banking that sets us apart from other types of financial institutions: relationships. At Mid Penn Bank, we pride ourselves on a 150-year history of relationship building. We have been around as long as many of the communities we serve. We are invested on so many levels in the people, the businesses, and the history of the towns in our footprint.

As a community bank with such a rich history, Mid Penn Bank is uniquely positioned to develop just the kind of relationships like the one we have with Bertie Ziegler, her family and their businesses. We work together with our customers to learn about and listen to their needs and are responsive and collaborative in developing custom financial solutions for them. Managing money aside, it’s also paramount that our branches provide an experience to people that make them excited to come back and bank with us. Over the years, I’ve been a customer with banks big and small and I can tell you that not one of them ever shared with me a story like this: a story of friends, gathered together in the early morning to share a meal–friends that met at a bank, of all places. So now, I’m sharing that story with you as a testament to the very foundation of how Mid Penn Bank does business and what makes us, and the people who bank with us, so special.

Mid Penn Bank is special because of the people that are associated with it: our employees, our leaders, our communities, our customers. Throughout 2019, we will be featuring those people in a series of blog posts. Those blogs will tell the stories of our communities and their members and/or be penned by Mid Penn Bank employees.

“Breakfast at Bertie’s” was written by Kate Moyer, a Marketing Officer who has been with Mid Penn Bank since 2018.