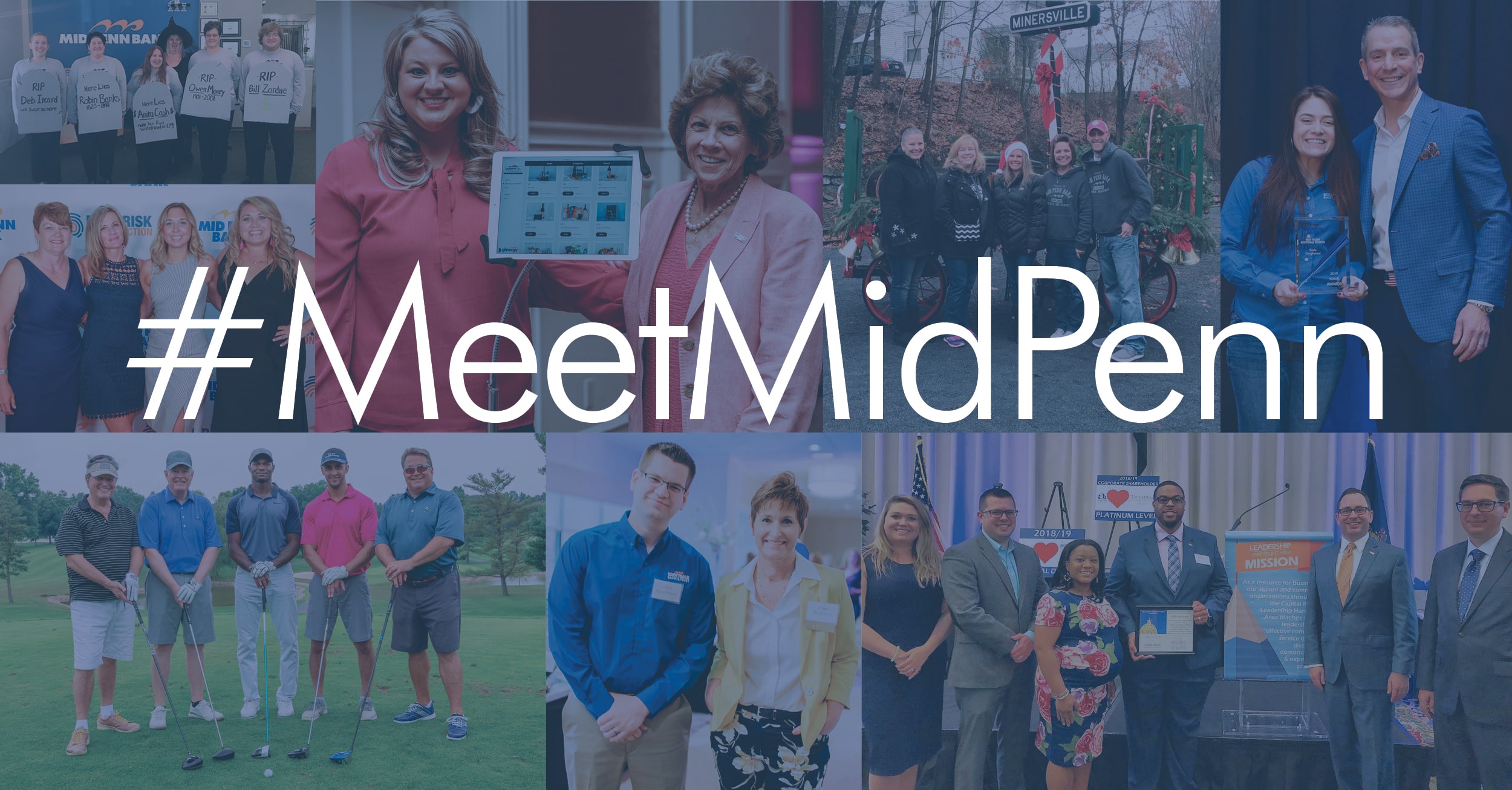 For 151 years, Mid Penn Bank has remained committed to serving the local community and providing comprehensive financial solutions. Our employees are the way in which we deliver exceptional service and outreach to the many communities we serve—and they’re the best of the best. In our periodic blog series, “Meet Mid Penn”, we will proudly introduce you to the folks who make our bank GREAT!

Joan is a part of our Executive Management team at Mid Penn Bank. Her favorite annual Mid Penn Bank event to be a part of is the Celebrity Golf Tournament. An avid golfer, she has been golfing in the tournament since it began in 2015. Both of her children are accomplished golfers, too. Joan’s impact at the bank extends well beyond her own duties; her son Evan works for Mid Penn Bank as a Commercial Loan Officer, and her daughter Claire recently started at Mid Penn Bank as an Associate in the Professional Development Program!  Joan says that the best part of working at the bank is engaging with the customers and employees on a daily basis. One of her favorite memories is being honored at the WAVE awards with the Top Lender award in 2018. Joan’s dream vacation is to visit the stunning Pebble Beach Golf Links in California. Some of her hobbies consist of golfing, reading a good book and enjoying fitness classes. Little known fact: Joan has a deep passion for 80’s rock concerts!

Turie has been a deeply involved employee at the bank for the past 10 years. With over 39 years in the banking industry she has acquired many skills and accolades. Turie has been interviewed by the Wall Street Journal and has rung the bell on the floor of the New York Stock Exchange. When she isn’t working she is dreaming of taking an RV across the country for a tour of the United States. Something you may not know about Turie is that she initially enrolled as a pre-med major in college but ended up in banking and finance! Turie says the best part about working at Mid Penn Bank is the people. “Everyone truly believes in our Mid Penn mission and vision and I’ve never spoken with anyone who wasn’t helpful.” Her favorite community event to be a part of is the Mid Penn Bank Celebrity Golf Tournament and her favorite memory with the bank is the experience she had at the 150th celebration of the bank. “It was an awesome experience and really solidified to me that this is a great place to work.” Turie adores working in her community and she is not going to slow down anytime soon!

Kellen has been a great asset to Mid Penn Bank for the past 5 years. He enjoys the “family vibe” that runs through the bank and the genuine connection he has made with his co-workers. One of Kellen’s favorite parts of his job is reviewing commercial loans. He says, “I enjoy reviewing commercial loans because it gives me a first glimpse of upcoming projects in the community.” He also likes that no two days are the same at Mid Penn Bank. Everything that lands on his desk is different. Something you may not know about him is that Kellen is also a great cook! He has an Associate’s degree in hotel and restaurant management from a culinary school. Kellen also enjoys traveling. He has visited the Bahamas three times, Mexico and Jamaica twice and the Grand Turks and Montreal once. Kellen also enjoys visiting new states within the U.S. One of Kellen’s favorite memories with Mid Penn Bank when he first started and he crossed paths with the bank’s President and CEO, Rory Ritrievi at the Camp Hill Greek Fest. “Rory spotted me out of the massive crowd, gave me a big hug, and really welcomed me to the team. That lasting memory really impacted me.” Kellen is a huge sports fan as well, rooting for the Dallas Cowboys. In 2018 he had the opportunity to visit AT&T Stadium in Dallas, TX to watch the Cowboys win the NFC Championship. He says it was one of the best experiences of his life.

As Commercial Loan Officer in the Capital Region, Christyan feels that Mid Penn Bank has had a tremendous impact on his life. He has been able to grow in his role with Mid Penn Bank. “I was

initially attracted to the SBA lending program and the bank has supported me along the way. Helping local entrepreneurs fulfill their dreams is a fantastic job to have.”

As a big time sports fan, Christyan roots for the San Francisco 49ers. When asked what his favorite Mid Penn Bank event is, Christyan says, “No doubt, it’s our Mid Penn Bank Celebrity Golf Tournament for Charity. All of the events, from the pairings party to the golf tournament are always a blast. We get to meet some awesome people and big name celebrities and we raise a ton of money for a great cause.” Christyan states that something many people do not know about his is that he was homeschooled his whole life. Christyan says the best part of working at Mid Penn Bank is the culture. “A lot of the people I work with on a daily basis aren’t just co-workers but friends.”  One of the most important parts of his job is to maintain the core values within the company. “While the bank is and has been growing at a rapid pace, we are very much focused on maintaining our community bank values.”

Tamara enjoys working for Mid Penn Bank because of the constant community involvement and being able to give back to the area where she lives. Tamara says, “I really enjoy developing great relationships with all of our customers.” Tamara’s proudest achievement is when she helps a customer with their banking and gains their trust. She loves hearing from the customers who share how much they “love” the bank and the other employees for all the great work they do. Her favorite memory while working at Mid Penn bank is the Trunk or Treat Community event because she loved “seeing all the kids come through the line with their costumes on and watching them react to the decorated cars.” If Tamara could travel anywhere she said she would love to go to Hawaii and stay at one of the beach huts right on the water, of course while enjoying her husband’s baby back ribs.

Carlyn likes to spend her summer days kayaking with her family and making a fire at night on their back patio. She has a set of twins who motivate her to work hard every day. Carlyn’s favorite part about working at Mid Penn Bank is the people whom she works with. “I love how our employees are highly engaged and motivated to serve our customers and all the while are able to have fun in the process.” She also enjoys volunteering with Mid Penn Bank. Her favorite memories are from the Harrisburg Hoopla, a fundraising event run by Harrisburg Young Professionals and The Foundation for Enhancing Communities. Something you may not know about her is that she played the piano and participated in the choir while attending college. Carlyn manages entry-level employees in her role. “I love being able to influence the younger employees we hire and to help guide their careers,” she says. As a personal goal, she is working on appreciating the little things that bring joy to her each day. Carlyn’s favorite quote is, “Enjoy the little things in life, because one day you will look back and realize they were the big things.”

Julia first entered the banking world as a part-time teller with Mid Penn Bank. Over the years, she has been a great asset to the company, moving from part-time teller to full-time teller, eventually becoming the assistant branch manager at the Lykens branch. One of her favorite memories with the bank is winning the President’s Cup for the branch for 3 consecutive quarters and eventually having the award retired to the Lykens branch! It is now displayed in the main lobby of the bank. Julia also appreciates working in the town where she was born and raised. “Almost daily, I see either family or friends and that makes me very happy. I know I am at home in Lykens.” When she isn’t working Julia is dreaming of a fabulous vacation on a land and sea cruise to Alaska. Her favorite part of working at Mid Penn Bank is the relationships she has built along the way. She shares, “I have built relationships with current co-workers, past co-workers and customers that will have a life-long impact on my professional and personal life.”

Kayla has been a part of the Mid Penn Bank team for almost 6 years now! Some of her job responsibilities as a Customer Service Representative include: opening accounts, taking loan applications, and helping the branch provide the best customer service to our clients. Her favorite part of being involved with the bank is the community parades and events. “It expresses our dedication to the community and I have had customers tell me they really enjoy seeing us at these events.” Kayla’s favorite holiday is Thanksgiving because she enjoys spending time with her family and eating all the wonderful food. Her favorite summer activities consist of going on hikes and having cookouts with her family. Kayla is motivated by being able to help people and seeing how her hard work pays off.