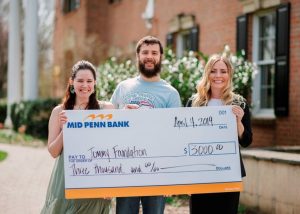 Mid Penn Bank, as a part of its annual Educational Improvement Tax Credit (EITC) donation efforts, has contributed $3,000 to The Tommy Foundation.

Mid Penn Bank Cash Management Officer, Ravane Cristino, presented the $3,000 contribution to representatives Richard and Sugey Everts, co-founders of The Tommy Foundation in March. Mid Penn Bank views local nonprofit organizations as a cornerstone to the community and makes it a priority to support them.

EITC Tax Credits are provided to eligible businesses contributing to designated EITC organizations. EITC designations are approved by the Commonwealth, annually. In 2018, Mid Penn Bank provided more than $711,000 in corporate and EITC contributions.