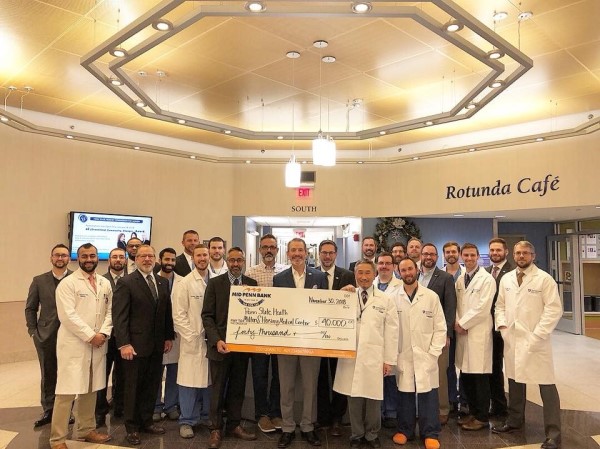 April is designated Community Banking Month, and the Pennsylvania Association of Community Bankers utilizes this national celebration as a platform to communicate the important role that community banks play supporting their hometowns and neighborhoods with an annual awards program.

Entries are evaluated on the IMPACT to the community: Implementing Meaningful Projects & Activities to help build stronger Communities for Tomorrow.

Mid Penn Bank was honored during the PACB Region II Meeting on March 27, 2019 for their invaluable connection and service to Penn State Milton S. Hershey Medical Center’s Urology Department, through their No Shave November program. Twenty-eighteen was a watershed moment in Mid Penn Bank’s history of No Shave November campaigns—they donated $40,000 which demonstrates a more than 166% increase over 2017’s donation of $15,000. The funds raised were generated from an employee-driven, crowd-sourced fundraising campaign which enabled employees to exponentially increase their impact by encouraging friends and family to give to the cause, as well.

“Our employees care deeply about serving their community; they give generously to numerous causes throughout the year with contributions of both their time and money. This year’s campaign was successful because of their altruism and dedication,” said Mid Penn Bank President & CEO, Rory Ritrievi.